The Department of Energy (DOE) announced it will fund up to $220 million of R&D projects to modernize America’s aging power grid infrastructure over the next three years. Accompanying this, DOE released its ¨Grid Modernization Multi-Year Program Plan¨ (MYPP), a strategic blueprint that informs and guides a national R&D agenda involving a consortium of DOE National Laboratories.

The Grid Modernization Laboratory Consortium (GMLC) is made up of 14 DOE National Laboratories and dozens of industry, academia, and state and local government agency partners across the country, according to a DOE news release.

DOE is providing funding for an initial set of 88 grid modernization projects. While a few focus specifically on microgrids, many, if not all, of them will advance development of power technologies that could be of use to microgrid project developers, utilities and other relevant stakeholders. 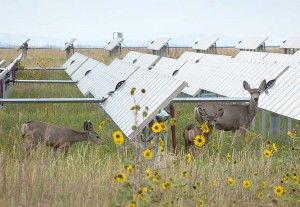 “Modernizing the U.S. electrical grid is essential to reducing carbon emissions, creating safeguards against attacks on our infrastructure, and keeping the lights on,” Secretary Moniz was quoted as saying.

¨This public-private partnership between our National Laboratories, industry, academia, and state and local government agencies will help us further strengthen our ongoing efforts to improve our electrical infrastructure so that it is prepared to respond to the nation’s energy needs for decades to come.”

A full list of the Grid Modernization Initiative projects, participating laboratories and partners, as well as additional information is available on DOE’s website. Among them, UPS, Waste Management, Burns McDonnell, Harshaw Trane, LG&E and the State of Kentucky will carry out a 2-year, $1 million ¨Industrial Microgrid Analysis and Design for Energy Security and Resiliency.¨

Also directed specifically at advancing microgrid technology, Alaska state agencies, universities and Intelligent Energy systems have banded together to form the Alaska Microgrid Partnership, which is to develop a programmatic approach and framework that provides the basis for stakeholders to reduce diesel fuel consumption in remote microgrids by at least 50 percent and improve system reliability, security and resiliency without increasing system lifecycle costs.

“The Grid Modernization Laboratory Consortium is a new way of efficiently leveraging the strengths and capabilities of America’s national laboratories to deploy new concepts and technologies that will make the grid cleaner, more productive, and more secure,¨ Hannegan stated.

¨The projects announced today are an important first step towards achieving the DOE vision of a modernized grid for the nation.”

DOE has invested more than $4.5 billion in grid modernization and smart grid projects via American Recovery & Reinvestment Act funding. Those investments are paying dividends in communities throughout the nation, reducing electricity costs while at the same time improving efficiency, reliability, resiliency and security, DOE highlights.

¨In Tennessee, for example, as a result of Chattanooga’s Smart Grid Investment Grant (SGIG) project, reliability increased by 45 percent. In Georgia, an electric cooperative deployed advanced metering infrastructure under the SGIG program, and reduced its operational costs by 65 percent. Service is restored faster after weather-related grid outages and emissions have been reduced. In addition, consumers are now able to better manage their own consumption, saving money and electricity.¨

Investigation, development, and analysis of the risks, costs, and benefits of a microgrid utilizing renewable energy systems at the UPS WorldPort and Centennial Hub facilities. Develop a roadmap to help industries evaluate microgrid adoption by defining institutional and regulatory challenges associated with development of industrial-based resilient systems.

Develop a design basis framework and programmatic approach to assist stakeholders in their efforts to reduce diesel fuel consumption by at least 50% in Alaska’s remote microgrids without increasing system lifecycle costs, while improving overall system reliability, security, and resilience.

Three campuses (PNNL, UW and WSU) will develop and test a range of tranactive control activities on each of the 3 campuses.  They will also develop the ability to coordinate across these three campuses to provide coordinated services to the PNW power system and their serving distribution utilities based upon the transactive response of key loads on the campuses.  The UW will emphasize energy storage and coordination for peak management and provision of flexibility.  The WSU campus will leverage its microgrid and major campus loads and thermal storage to deliver transactive response.  And PNNL will advance controls in its new SEB grid building and other campus loads to help the City of Richland better manage it’s demand limits.  OE and BTO collaborated in the design and cost share of the project.

In cooperation with Energy Writers and Renewable Domain.
© Copyright 2020, All Rights Reserved